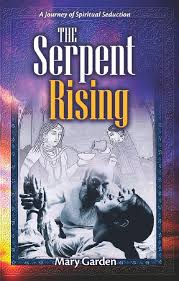 The Serpent Rising: A Journey of Spiritual Seduction (Sid Harta Publishers 2003) is a memoir by Mary Garden about her time as a young woman in the 1970’s when she spent years living in India searching for her personal guru and looking for spiritual enlightenment.

Leaving her family in New Zealand and a promising academic career, Garden travelled the Indian continent practising yoga and meditation, and (literally) sitting at the feet of infamous gurus such as Sathya Sai Baba, Rajneesh and Swami Balyogi Premvarni. She eschewed all personal possessions, was given a new name and continually sought true enlightenment as she followed the teachings of these ‘god-men’, like thousands of other Westerners alongside her. But what she discovered – eventually – was very far from the bright light of truth and wholesomeness. Rather she became ensnared in a web of psychological mind control, physical and sexual abuse (even resulting in an abortion) and mind-altering emotional pain and scarring. This is her story of those years – her searching and yearning self, her indecision and self-doubt, her eternal optimism for the truth, and her clear-eyed knowledge – in hindsight – that the majority of ashrams, yogis and gurus were nothing but charlatans and narcissistic, power-hungry and dangerous self-appointed leaders who preached one thing and practised something else entirely. This book is an interesting account of what really goes on behind the scenes and raises the pure and chaste veil to reveal the true nature of these cult-like communities and the damage they inflicted on already traumatised and vulnerable followers.