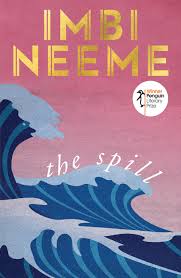 The winner of the 2019 Penguin Literary Prize was the recently released novel by Imbi Neeme, The Spill (Penguin Viking 2020), an impressive debut that explores the complexities of families, the dynamics of relationships that are ever-changing over time, the inconsistencies of memory, and the complicated bonds between parents and their children, and between siblings, most particularly sisters.

The Spill is a highly engaging story that had me hooked on the two main characters from the very first page and maintained my interest and concern for them over the decades that the narrative covers. It is 1982 and young sisters Nicole and Samantha are waiting for their mother outside the pub where she is having a well-needed drink after a car accident that has left them all a little dazed and with some minor injuries. The story then jumps to the present day, but returns again and again to that fateful day in 1982, and to the innocence and vulnerability of the girls, but also the aspects of their characters that – even then – show the promise of the adults they are likely to become.

Time has been carefully crafted in this novel. The structure takes us back and forth between 1982, and to many years between then and now – 2015, 1990, 2006, 2013, 2018, 2010, 1991, etc. All of this jumping around could, in the hands of a less skilled writer, become jarring or confusing, but Neeme manages the transitions smoothly, effortlessly taking us to certain times in the characters’ lives in the form of flashbacks or passages that reflect the period. I kept expecting to become befuddled, but I just didn’t. Her chapters are short and sharp. Each has a purpose; each adds to the giant jigsaw puzzle that is the life of these sisters.

The day of the accident changes Nicole and Samantha’s lives forever, but not in ways that are immediately apparent. As they navigate adolescence and grow into adulthood, pieces of information about that day – and the events surrounding it – are gradually revealed, allowing Neeme to slowly but inexorably paint a complete picture of the event and its repercussions. One thing that she does extremely well is her use of small details to link the varying sections. She will mention one tiny incident or fact or memory without explaining its relevance or importance, but then its significance becomes obvious in a further chapter. In this way, she lays a trail of breadcrumbs throughout the entire novel, leading us towards certain revelations.

This story is all about families and how they function (or don’t). The girls’ mother Tina is an alcoholic, and the present day part is set 40 years after that accident when the sisters are dealing with their mother’s death. Nicole has drifted for many years but has finally landed in a place where she is happy. Samantha has built the life she always wanted but is hiding secrets that could betray her to those she loves. Their relationship with their mother has always been complicated. Their father is on to his third wife and relations with him have also not always been smooth. But in the aftermath of Tina’s death, Nicole and Samantha begin to understand the ripple effects of what happened so many years earlier, and to see their mother in a different light.

The characterisation of all the main characters, but particularly Tina, Samantha and Nicole, is very well done. I was instantly engaged with this family and found it difficult to put the book down. The characters are real, infuriating, frustrating, sympathetic, annoying, determined and completely themselves. Neeme’s construction of the narrative is deftly handled, with many things half-said, or left unsaid, and it is left to the reader to join the dots as the story progresses. Her examination of memory, truth and lies is beautifully rendered. This is a fractured family, a broken family, a family injured by alcohol and betrayal and blame. But it is also a family willing to look hard at the past and contemplate a different future, without ever being saccharine. And it is so funny! There are genuinely hilarious moments that will resonate with anyone who has ever been a sister, a parent, a child. Moments of glorious and ridiculous truth. Moments of doubt and insecurity and shame. Moments of realisation and acceptance. Petty jealousies; misunderstandings that have long fuelled secret, seething anger; sliding doors moments that change everything. Long-held beliefs that have shaped lives and personalities and alliances – all dismantled by truths revealed. All the terrible mess of family, laid out for all to see.

This highly accessible story is compelling and easy to read but it also touches on deeper themes of love, family, the choices we make as we go through life, and how those choices affect us over time. The references to the eighties and nineties are immediately recognisable and familiar, but not heavy-handed. The major events of these girls’ / women’s lives are presented in taut vignettes that highlight a few random details that give us the overall picture. As they consider their regrets, the two sisters comprehend their early lives and the paths they each have chosen.

A nuanced and complex story of family, The Spill will appeal to a wide variety of readers, and leave you thinking about the characters long after the last page.