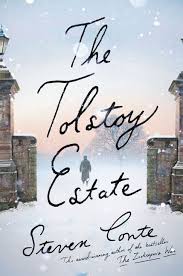 My advanced copy of The Tolstoy Estate (Fourth Estate Harper Collins 2020) arrived with this emblazoned on the cover: ‘A Novel for People Who Still Believe in the Saving Grace of Literature in Dark Times’. We are certainly in dark times now in this Covid world, and the novel is set in the dark times of World War Two, but as promised, this story is like a blessing, a saving grace, a tale of love and optimism and hope amidst the absolute terror and trauma of war.

This is the second novel for author Steven Conte, who won the inaugural Prime Minister’s Literary Award for Fiction in 2008 for his debut The Zookeeper’s War. I can only assume that this second book has been quietly cooking away for the last 12 years and now here it is, eagerly anticipated, extremely well done, delicious and worth the wait.

The Tolstoy Estate is both a well-crafted and beautifully written literary tale but also a dynamic and powerful story with unforgettable characters. The novel explores themes of sacrifice, love, desire, betrayal, duty and the power of great literature to inspire thought, to change minds and to connect people.

Rarely do you come across a book that excels in so many aspects. This is a tender and poignant love story. It is a poetic and evocatively descriptive tale. It is plotted like a tense page-turner, with the raw facts of war – specifically of the medical treatment of war injuries – rendered comprehensible and compelling. And it is driven by its characters, people who we care about from the first pages; personalities that burst onto the page and refuse to stay silent. So much of this story is told in dialogue and this enhances the engagement between character and reader – the spoken words are authentic, sharp, funny, carefully observed, colloquial and interesting. And yet scaffolding all of these relatable aspects is the highly literary work of Leo Tolstoy, his book War and Peace a touchstone for the characters, for the setting and for the narrative.

Set during the German invasion of Russia in WWII, the story features Paul Bauer, a German military doctor, who is assigned to establish a field hospital at Yasnaya Polyana, the former grand estate of the famous writer Count Leo Tolstoy. He encounters the woman left in charge of the estate, fiery Russian Katerina Trusbetzkaya, and despite her initial hostility, a tentative friendship develops between them. But the war is not going according to Germany’s master plan, and over six weeks in the bitterly harsh winter of 1941, Bauer’s arrogant commanding officer Julius Metz becomes more unstable and unhinged, Bauer’s patients come thick and fast from the frontline, and his friends and colleagues suffer the traumas of war in many different ways.

The writing is astonishingly good. It doesn’t shy away from the brutality of war, from the visceral, messy, bloody, heartbreaking horror, and the sections that describe Bauer’s long, unremitting working hours in his relentless attempts to treat wounded soldiers with only basic equipment and supplies, and in freezing temperatures, are both frightening and compelling. But this is balanced by the relationship dynamics between the men, and by the developing frisson of desire between Paul and Katerina, and the absolutely engaging dialogue which exactly captures the characters’ torn loyalties, their unspoken reservations, their bravado and their quietly held fears. These are men and women in extreme circumstances, expected to achieve extraordinary feats while suffering terrible personal trauma. Conte manages to emphasise both the very best and the very worst of human behaviour through the smallest acts, the simplest phrases and the most subtle and nuanced interactions. He explores the ‘moral, emotional, physical and intellectual limits that people reach in war time’, and he does this through the interpretation of a story so engrossing and readable that I found it difficult to put down.

As is typical of a great writer, Conte takes us immediately into the action from page one. This means that those first few pages are dizzying and intense as we try to orientate ourselves into THIS place, THIS time, and engage with THESE people. But by the end of Chapter One, which finishes with a shocking act, I was completely hooked.

Structurally the linear narrative is straightforward until a surprising point about halfway through the novel where the author suddenly takes us forward in time, through an exchange of correspondence, to give us a tantalising glimpse of where some of the characters are in the future. It is only a taste, a small teaser, enough to make us wonder, and then we are back in the thick of the action. He uses this device several times throughout the story, jarring us out of the war and catapulting us into the future. Rather than spoil any plot points, this serves only to whet our curiosity for how he plans to get us from A to B, and how indeed the characters are going to end up where they seem to be.

The final chapter – with its characteristically offhand summation of the fate of one of the characters – is devastating and beautiful and so, so moving.

And the entire story begins and ends with Tolstoy: his life, his work, his writing, his relationships, his death, his legacy.

This is an absolutely riveting book. While it will have obvious appeal to readers who love war stories or who are fascinated by the life and work of Tolstoy, the human emotion and tenderness, the poignancy and humour will have as much wide appeal as books such as All the Light We Cannot See by Anthony Doerr and The Book Thief by Markus Zusak.