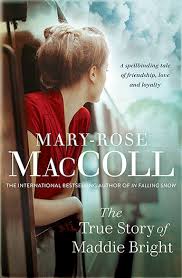 Brisbane Writer Mary-Rose MacColl’s latest novel The True Story of Maddie Bright (Allen & Unwin Books 2019) is an historical mystery that revolves around the royal family and explores the complicated dynamics of power within relationships. With themes of loyalty and service, ambition, sacrifice and betrayal, the book examines love and friendship, and the complex ties of family across the generations.

The novel is comprised of three interconnecting stories, which weave in and out throughout the book, jumping back and forth in time. The first concerns 17-year-old Maddie Bright who takes a position as a serving girl on the Royal Tour of Australia by Edward, Prince of Wales. During the journey, by train and by ship, she forges friendships with the dashing young prince and his closest confidantes – Helen Burns, his outgoing press secretary, and Rupert Waters, his aide and most loyal servant. The 1920’s are depicted in lavish colour and energy – the spectacle of the tour, the responsibilities and expectations of the prince who would be king (but who would ultimately abdicate to marry Wallis Simpson), the devotion and adoration of the thousands of Australians who waited each day for a glimpse of their prince. But this section is also dampened by the aftermath of war and the many families destroyed or deprived of their loved ones by the Great War which had ended only a few years earlier.
The second part of the book, set in Brisbane in 1981, is the story of Maddie Bright in her late 70’s, the famous writer of the book Autumn Leaves, published decades earlier and never followed by another, and now living almost in isolation in a run-down house after having lost everyone over the years since her youth on the Royal Tour – her friends, her family, all gone. This part is set during the time that Diana married Prince Charles and became a princess.
And the third story features Victoria Byrd, a journalist in 1997 covering Diana’s death and the terrible outpouring of grief from a nation and the world. On a personal level, Victoria is struggling to accept being the focus of attention from the other side of the camera as she avoids the celebrity paparazzi hounding her since her engagement to famous Hollywood actor Ben Winter. And when her editor sends her to Australia to meet the elusive writer M.A. Bright, who it appears may have written a sequel to her bestselling novel, Victoria is intrigued and eager to escape.
These three stories are interwoven with other snippets of the fictional novel Autumn Leaves by M.A. Bright, and the book begins with the first chapter of the new book, Winter Skies – a rather traumatic opening scene where a young woman leaves her newborn at a foundling wheel at a church, only to discover that the baby froze to death and never made it to the orphanage.
So there is certainly a lot going on in this novel and it does require some concentration at first to keep the three separate story lines straight and to wrangle the large cast of characters. But the persistence is worth the effort. MacColl has successfully braided together these disparate stories, punctuated with thwarted romance, starry-eyed idealism, unrequited love, parental failure, domestic violence, power and privilege, and followed each path until they eventually – inevitably – coalesce into the one story. Told with warmth and humour, with poignancy and care, with attention to historical detail and in an easy-to-read style, The True Story of Maddie Bright is a fictional tale based on two of the most controversial royal figures – Edward and Diana. MacColl specialises in writing authentically about the domesticity of mothering and the global duty and horror of war, and in this book she has combined the two to provide a heart-warming story of connection and memory. Readers of Toni Jordan’s most recent work The Fragments will find similarities in the themes of a forgotten literary heroine, the intersecting of memory and history, and characters at the end of long lives finally coming to grips with their own personal stories.