The Truth About Faking It – Cassie Hamer 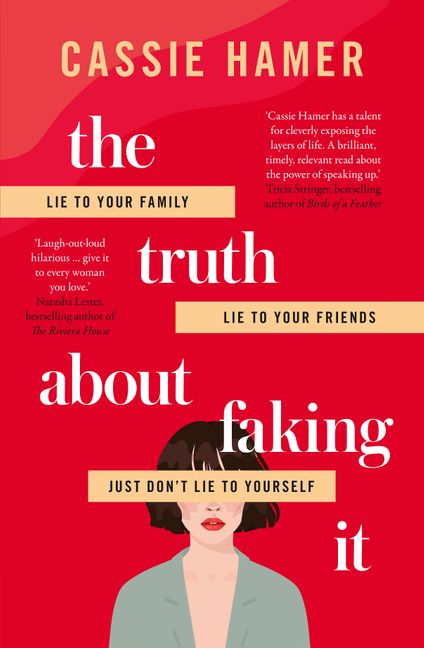 Cassie Hamer’s third novel, The Truth About Faking It (Harlequin 2022) again denotes her inimitable style: light-hearted and heart-warming, funny, with snappy and sharp dialogue, relatable contemporary characters and humorous plots and set-ups that allow for plenty of misunderstandings and character conflicts.

In this book, everyone is faking it to a degree. The story features three generations of women, grandmother, mother and daughter, all adept at hiding their feelings and suppressing their emotions. When Ellen Trainor’s estranged husband, David, is killed in a Thai boating accident while connecting with his recently discovered long-lost brother, Ellen feels hard done by. It’s a rude interruption to her life of Zumba and Bridge. But it does free her up to marry her boring but usefully wealthy boyfriend, Kenneth.

Ellen’s daughter and granddaughter both work in the media. Both are devastated by the death of their father and grandfather and not at all pleased that Ellen is so blasé about it. They are determined to uncover the truth. Natasha is a well-known and respected news journalist, a presenter for a top-rating current affairs TV show. Time is not her friend, however, and she barely has enough time to navigate the torrid politics of prime show ratings and bureaucratic backstabbing, let alone investigate her father’s boating accident. And when Ellen’s unpredictable behaviour precipitates a media shitstorm, Natasha’s personal life hits crisis point. Natasha’s daughter Georgie is a producer on the reality show The Single Gal. She is professionally fiercely focussed on achievement but is hampered by the ludicrous fact that she appears to have fallen for one of the show’s contestants, who is of course strictly off limits to anyone but the featured Single Gal.

While all three have different feelings about David’s death, they are united in their suspicion that not all is as it seems. And while they try to unravel the truth about the accident, the also pull apart the lies they have been telling themselves.

The Truth About Faking It explores themes of family, loyalty, loss, grief, ambition, greed and love. There is a rather good subplot about a sexual abuse survivor who is interviewed by Natasha for her TV show, and the book navigates the tricky terrain about how and why this young woman should be ‘re-victimised’ by telling her story, and the ethical dilemma surrounding her situation. A personal link with Natasha’s own past, and a secret she has long held, makes for some thought-provoking writing and reading around this subject.

Cassie Hamer is great at writing funny, humorous dialogue and presenting quirky characters in cringe-worthy or ridiculous or eccentric situations. Like a good rom-com movie, The Truth About Faking It will make you laugh at the characters’ exploits while keeping you engaged with a light and entertaining plot. And as with all her books, readers will recognise themselves or those they know in the pages.