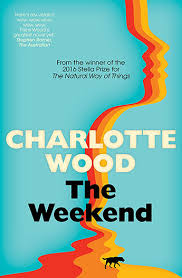 Charlotte Wood’s much anticipated next novel, The Weekend (Allen and Unwin 2019) in many ways could not be more dissimilar to her previous award-winning book The Natural Way of Things. While that story was bleak, angry and desperate, The Weekend is gentle, contained and thoughtful. But what they have in common is Wood’s extraordinary literary style, so reminiscent of Helen Garner, that manages to convey a simple story in accessible and plain language, detailing the minutiae of daily life with a keen and observant eye, and critical analysis, whilst also managing to say something profound about the whole of life and all its many facets. This is a book about female friendship, aging and ambition. It is about the reckoning we all must face towards the end of our lives. It is about stereotypes and gender and physical decline and acceptance and the settling of ourselves with our fates. And it is about a dog.

I knew this book featured a dog; I had heard the author speak about the importance of the animal, Finn, to the story, but until I read it, I didn’t realise how cleverly she had woven the dog’s presence – his personality, his frailty, everything he represents – into the lives of the human characters. Dementing, smelly, deaf, anxious, annoying, loyal, frightened, incontinent, and precious, precious Finn is a central motif in this book, doing so much hard work in terms of themes and attitudes and preoccupations, without really doing anything much at all. His presence alone represents so much and is so telling.

Finn belongs to Wendy, a published and acclaimed academic and intellectual, an old hippie who cares not a fig for how she looks (wild, mad, grey hair; orthopaedic sandals; crumpled clothes) but who cares very much for her aging and decrepit dog, who everyone else agrees should be put down. Wendy is in her seventies, along with her two friends. Jude is organised and controlling; she very much knows how to roll up her sleeves and get to work. She was a famous restauranteur, and has been involved in an affair with the same married man for forty years. Adele is an actress past her prime, with an elegant hairdo and a body still toned and fit from yoga and walking, a woman with no work and no money who lurches from relationship to relationship, ever hopeful that her really big break is still to come.

The fourth woman in the friendship group is Sylvie and although she has died almost a year before the book is set, she is still very much present, mostly as the glue that has held the four women together over more than fifty years, but also because it is her beach house at which the other three women have gathered, for the Christmas weekend, not to holiday (as Jude keeps reminding them) but to clean it out and sort through Sylvie’s stuff so that her partner (already moved to Ireland) might sell the place. And so the three descend on the weather-beaten beach house, with its ancient inclinator that transports them through the bush up the steep hillside to the dwelling with its dusty rooms, its neglected knick-knacks and its many, many memories. The women have all been here before, many times, and the house and its secrets begin to unravel the secrets of the women themselves. The weekend they spend together is full of frustrations, obligations, determination, long-buried hurts and fraying tempers.

Charlotte Wood writes insightful prose that cuts to the very heart of what it means to be human, to be aging, to be frightened and lonely and anxious. These women are variously jealous, petty, tired, vain, compassionate, short-tempered, frustrated, unforgiving, ugly, beautiful, contemptuous, demanding, kind, helpful, obstinate, judgmental, intolerant and fractious. Their friendship has weathered the storms of many years, the deaths of loved ones, the disintegration of relationships, the raising of children, the peaks and lows of careers, and the various ebbs and flows of each of their own separate connectedness to each other, and as a group. In many ways, they are closer than siblings. They are ‘older women’ who mostly have no more fucks to give; they are selfish about their desires because they know they might not have much time left to achieve what is left on their lists. Sylvie’s death has cemented a feeling of a countdown, of how random life and death can be, and how privileged we are to enjoy the time we have.

This book will make you ponder your own life and your own desires, hopes, failures and disappointments. And it is so terribly, terribly funny. Wood’s sharp eye notices every mean thought, every private act or behaviour, every unexpected and contrary position with razor-sharp wit and a deliciously quiet sense of charming wickedness. Each of the women is drawn with calculated and well-differentiated parameters, each grieving in their own way, each attempting to find their own way forward. And at the centre of this compelling narrative is Finn, despised by some and loved by others, but always unconditionally and unapologetically himself – a simple animal with basic needs and an uncomplicated way of being in the world, despite the reactions of others.

I really loved this book. I enjoyed the depiction of the characters, the confined and domestic setting, the thought-provoking themes. Charlotte Wood may have written a very different book from her previous novel – one filled with much more joy and humour – but it is no less accomplished or sophisticated.