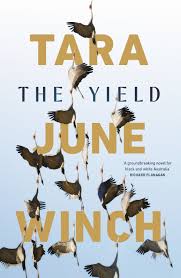 The much-anticipated new novel from author Tara June Winch, The Yield (Penguin Random House 2019) is a love song to language, culture and Indigenous heritage. In a proud memorialising of Aboriginal words and their meanings, Winch pays homage to her past and to the many elders who have gone before her, she recognises the important work done by others to faithfully record and remember language, and she tells a moving story that emphasises the pain and suffering of our First Nations Peoples, and the ripples of intergenerational trauma that still remain today.

The novel is structured on a framework of three narratives. The first is the dictionary of Albert ‘Poppy’ Gondiwindi, who has spent his life at Prosperous House on Massacre Plains on the banks of the Murrumby River. Albert knows he is coming to the end of his life, and so he works on an extensive project to write down Aboriginal words and then explain their meaning in English. As he does so, he gives us pieces of information about his own life from childhood, and he recounts his many journeys with his ancestors into the dreaming, where he learns from his elders some of the knowledge gained from thousands of years farming, cultivating, fishing, hunting and working the land, gathering in groups and societies, and telling ornate stories through complex oral histories. He is determined to put it all on paper, to note it for posterity, so that others who come after him will learn and be curious to find out more.

The second narrative concerns August Gondiwindi, Poppy’s granddaughter, who arrives back in Massacre Plains to attend Albert’s funeral after ten years living overseas. She left her family and her country after a terrible tragedy; a loss that was too huge to bear. When she returns, grief-stricken and guilty all over again, she reconnects with her Nana and her extended family and begins to get more of a sense of who she is and how she is inextricably linked to the land. The family’s grief is overshadowed by the news that Prosperous and the surrounding farmland is about to be repossessed by a tin mining company. August throws herself into the campaign against the mine, hoping that if she can find her grandfather’s dictionary, and other artifacts long lost, it will give them a chance to retain the land against the planned development. August rediscovers old friends, estranged family and the spirit of her Poppy as she realises that she is indeed Home.

The epistolary structure of the third narrative is both a fascinating insight into the past and a first-person account of invasion and colonialism viewed through a different lens. Every third chapter takes the form of parts of one continuous letter from the fictional Reverend Ferdinand Greenleaf to The British Society of Ethnography in 1915. Reverend Greenleaf migrated from Germany in the late 1800’s, and with huge sympathies for the plight of Aboriginal people being displaced, murdered, stolen from country and forced into indentured labour, he set up a Mission to provide skills and education, safe accommodation, and a dose of Christianity. As the story progresses, this section becomes increasingly more interesting, as Reverend Greenleaf struggles with his ideological / religious / white saviour ethos on the one side, and his empathetic recognition of the ongoing trauma suffered by Aboriginal people, through poverty, submission, displacement, illness, racism and abuse. His own internal struggle between what he was taught to believe and what he sees with his own eyes becomes evident. He questions his mission and the role he plays in interactions with the natives; he questions the motivations and intent of those in power above him; he questions his own faith and beliefs. The longer he is involved with Indigenous Australians, the more he comes to respect their culture and traditions, and yet still he is torn between his ‘moral duty’ and what he feels is right.

Braided together, these three narratives paint a tender portrait of a grieving family, a divided community, a forgotten language and a traumatic history. The inclusion of Reverend Greenleaf’s correspondence adds the perspective of a white colonial settler trying – but perhaps failing – to improve and contribute to Aboriginal lives. August is a contemporary young person seeking solace by escaping overseas only to realise when she returns that her country is a part of her from which she cannot be separated. And Albert, Poppy, returns to us again and again with wise words and a thoughtful narration of events.

The book concludes with Albert Gondiwindi’s extensive dictionary (a work in progress), which lists many more words than those included in the story itself. And in the Author’s Note, Tara June Winch explains her connection to Wiradjuri country and acknowledges those academics and scholars working to reclaim and preserve Aboriginal language. ‘Before colonisation there were two hundred and fifty distinct languages in Australia that subdivided into six hundred dialects’, she says. ‘The experiences of the fictional Gondiwindi family reflect those experienced by all Indigenous people touched by violence, segregation, abuse and the dehumanising policies and practices of colonialism [as part of which] governments and churches banned and discouraged the use of the native tongue.’ This of course resulted in the loss of ‘cultural knowledge, community history, customs and modes of thinking and belonging to the land’ which are all carried by language.

Through a compelling fictional tale, this novel reignites interest in the languages of First Nations Peoples in Australia and shines a light on the significance of words and the remembering of history. Announced today as the winner of the Miles Franklin Prize.