Things Nobody Knows But Me – Amra Pajalic 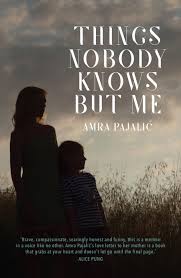 Things Nobody Knows But Me (Transit Lounge 2019) is a memoir by author Amra Pajalic about her experience of growing up between Bosnia and Australia under the care of her mother, who suffered from a mental illness, and other members of her extended family. This is a raw and vulnerable account of an adolescent girl struggling to make sense of her family relationships and her cultural identity along with all the usual teenage anxieties and fears.

The content of the story itself is important and illuminating, as Pajalic takes us into the minds of both herself and her mother through life-changing events and circumstances, and it is a brutally honest portrayal of her own flaws, insecurities and mistakes. She doesn’t hold back, and the result is a book that flays open the experience of living with somebody with a mental illness, and allows the reader to empathise with both Pajalic as a child, and also with her mother, who becomes more comprehensible as we uncover her own troubled history.

The author’s mother Fatima spends frequent bouts in hospital, hears voices and acts in strange and unsettling ways. Pajalic is only four when she realises her mother is different, and from then until she is 16, she and her brother have to cope with her mother’s illness and the effect on her relationships with men, friends and family members. For some years, the pair lives with their grandparents in Bosnia, which in one way is an escape from the difficulties with their mother, but in another way is just a different sort of problem, living a much reduced lifestyle with poverty and communism, civil war and disappearing countries always on the edge of their reality. But at 16, the school counsellor finally gives Pajalic a possible name for her mother’s condition – bipolar disorder – and that begins the author’s journey to understanding her mother’s story: her history of an arranged marriage at only 15; her relocation to the other side of the world a year later; and her background of hospitalisation for mental illness.

This is a moving story of the bond between mother and daughter, and a sometimes uncomfortable account of how that bond is tested, broken and repaired, over and over again. It is a frank account of family, and how your family can both endlessly disappoint but also show great loyalty. It is also a fascinating insight into a bicultural family, and how the ties of the old country can conflict with the pull of a new homeland.