This Taste for Silence – Amanda O’Callaghan 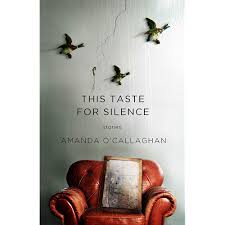 This Taste for Silence (UQP 2019) is an extraordinary debut collection of short stories by author Amanda O’Callaghan. Some of the stories are extremely short, less than a page, and some are much longer, but what they all have in common is beautiful, descriptive language, evocative imagery, tightly controlled sentences and well-drawn mini-portraits of compelling characters. The stories themselves are mostly of ordinary people going about the mundane business of living, but O’Callaghan manages to infuse even the seemingly most banal situation with poignancy, tenderness or – quite often – dread.

Almost every tale is suffused with an imminent death, or a loved one mourned, or a sinister mortal threat, or a memory of vanished things, a disappearance or a haunting, a loss, an absence, a legacy. The title is apt – this is indeed a book that has a taste for silence, for the who, where, when, how and why of silence, and its aftermath.
In the opening story, a lonely widow risks being vulnerable, and it doesn’t turn out well. And the early stories are often about illness and bereavement. There is a tale of a hoarder who once had a very different life. There are stories of possessions, and what they mean to those who keep them; the pain when they are lost; the unknowable mystery of old things passed down through so many generations that their meaning is no longer clear. Characters manipulate others in ways unexpected and shocking. There are secret children and hidden children and lost children and dead children and estranged children and neglected children. I think my favourite is The Golden Hour, where ‘…each feeling is compressed, shaped by tiny degrees into a new form. Too slow to be noticed. Like pitch dropping…’ – a story with a conclusion that is shocking but also made me feel strangely elated. There are stories of marriages and journeys and fears. The ways people cope with the horror of death; the small things that relieve them, that carry them onwards. Characters who bury their pain deep inside themselves, with only small chinks of the memory of it occasionally seeping out.
These are not joyous stories; they are unsettling and thought-provoking and haunting. But they are also graceful and refined, beautifully rendered. The writing is spare and fine, never saying too much but only hinting at what lies beneath. History, memory, past actions and beliefs, all are laid out with a light touch, inviting the reader to use their own imagination to delve deep and conjure up the unsaid.