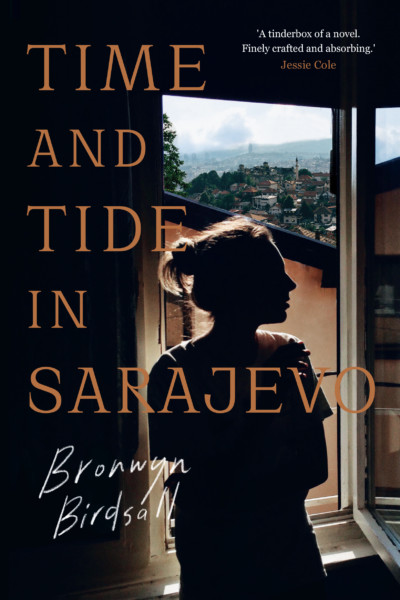 Author Bronwyn Birdsall has given us a glimpse into a world that probably not many readers are familiar with, in her novel Time and Tide in Sarajevo (Affirm Press 2022). Birdsall lived in Sarajevo, Bosnia and Herzegovina and taught English for four years in her twenties and while this is a fictional story, her memories and experiences from that time have clearly informed the novel.

This book reminded me a little of the novella My Name is Revenge by Ashley Kalagian-Blunt, in that it is built on first-hand experience and set in a country which is unfamiliar to me (the latter concerns Armenia). Reading Time and Tide placed me firmly in Sarajevo, which previously to me really only meant war and disruption. This more contemporary story allows great insight into the Sarajevo of modern times. In a country besieged by conflict, hope and optimism are rare but resilient qualities of the population.

The story is well-crafted, with every sentence devised with care. Birdsall has a lovely way with words, and the balance between authentic dialogue, action, tension and introspection is well done. Every detail of life is observed, from the small things such as the coffee drinking and the greetings, to the larger themes of conflict, dispossession, politics and protests.

The main character Evelyn is teaching English in Sarajevo two decades after the brutality and trauma of the 1990’s. Her job involves readying extremely bright and talented high school students for a scholarship exam that has the potential to change their lives. But when the novel opens, an adolescent son of a local hero has been stabbed, and a political cover-up makes it appear likely that the killer will go free. People begin protesting in the streets and the atmosphere suddenly changes from a friendly, marketplace community to large mobs of mostly students, facing up to police and overrunning public buildings.

Evelyn inadvertently discovers a piece of evidence that, if made public, would inflame the situation further. This is her inner conflict: to share the truth, or to keep it hidden to protect her friends and to ensure that her students sit their important exam. The whole narrative takes place over only a few days, and this is where Birdsall’s literary skills really come to the fore. The story is tight and taut, the tension building quickly, hour by hour, as the situation on the ground changes rapidly. It takes talent to be able to sustain such tension over a short time period throughout an entire novel.

One of Evelyn’s students, 15-year-old Tarik, is involved in the protests and she is consumed with ensuring his safety. But she is a foreigner in a strange land, and despite her job and the friendships she has cultivated, ultimately she is still an outsider.

What I found most interesting about this novel is the intimate observations about life in Sarajevo, the customs, the food, the politics and the sense of community. Birdsall depicts all of this extremely well. I’m sure that for anyone who has ever lived or even visited this part of the world, this book would resonate even more deeply. But if you don’t read it for the exotic location, read it for the narrative – a tightly spun, spiralling story of a young woman out of her depth, attempting to navigate personal and work relationships while holding a crucial secret that could hurt those closest to her.