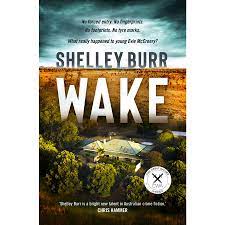 I know I keep saying this, but what is it about Australian debut crime writers lately, particularly those setting their novels in the rural outback? Is there something in the water? (Or perhaps in the dry dust…?) Because there seems to be an abundance of excellent crime stories from new writers. My most recent crime read is Wake (Hachette 2022) by Shelley Burr, set in the dry, red interior of New South Wales in the small town of Nannine. The land is sunbaked and drought-ravaged. Mina McCreery lives alone in her family home, a now destocked sheep farm, devoid of livestock or company, but full of memories.

Nineteen years earlier, Mina’s twin sister Evelyn simply vanished in the middle of the night from the bedroom they shared. The crime has remained unsolved, despite a million-dollar reward funded by Mina’s mother before she died. The case is still a popular topic on true-crime chat rooms on social media, with theories abounding about who might have been responsible for Evelyn’s disappearance, or might have been complicit in covering up the crime. Mina has spent a lifetime under the shadow of her sister’s infamous vanishing.

Lane Holland is a private investigator who makes a living by attempting to solve cold cases and collecting the reward money. If he solved the McCreery mystery, he would solve quite a few financial problems of his own, including paying for his much younger sister’s university education. But Lane’s involvement is not purely related to money; he has darker motivations for wanting to crack this particular crime.

The lives of these two main characters, Mina and Lane, and the ever-present force of Evie despite her physical absence, thread together in surprising and unexpected ways. The mystery is seemingly an impossible conundrum – there was no forced entry, no fingerprints or footprints, and no tyre tracks. Evie was there one moment and gone the next. Where to even start with such a cold case?

The writing in Wake is assured and confident. The story is page-turning and compelling. Mina’s lonely and isolated character, forever carrying the heavy weight of her sister’s disappearance and the rumours around her own possible involvement, is depicted with unforgettable fortitude. Lane is also a complex and well-rounded character, with the dark secrets from his past only gradually revealed as the plot does indeed thicken.

This is a whodunnit, but it is also a deeper story about family, sacrifice and loyalty, and about the lengths people will go to in order to uncover and understand the truth of the past. It contains enough grief, loss, guilt, secrets, lies and subterfuge to completely mislead the reader from chapter to chapter. It is atmospheric with great plotting and superb characterisations.

Every crime book is different, but Wake has a certain something in the story that sets it apart. You won’t be able to put it down.