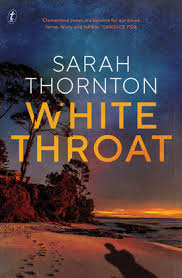 White Throat (Text 2020) is the second crime novel in the Clementine Jones series by author Sarah Thornton, continuing on from her debut Lapse. Although I enjoyed Lapse, this new book is clearly a step up, both in the writing and the plotting. Also, in the characterisation, Thornton gives us much more depth to her protagonist Clem and reveals more of the scaffolding around her life, her history and her motivations.

This book also doesn’t feature football so much, so perhaps that appealed to me too! Clem has moved to the Great Sandy Straits where she becomes involved in a campaign by a local environmental group to save the endangered White Throat Turtle. Developers are looming over the creature’s habitat and the locals are divided, some wanting the area left undisturbed, and some hoping for ‘jobs and growth’.

When a body is found at the base of the quarry – and not just any body, but Clem’s friend, and a leader of the fight to save the turtle – the police rule it as a suicide. But Clem is not convinced and joins up with her old friend Torrens (ex-con, reformed standover man and footballer) from the previous book, to investigate and uncover the truth.

With timely subject matter linked to climate change, and a fast-paced plot that will keep you turning the pages, White Throat made me warm to Clem Jones even more than with the first book. It’s great to see a female heroine, and one not shy to take on the establishment and the bad guys. This is addictive rural crime.

What I love most about Thornton’s writing is her authentic dialogue and her grip on character. Not just Clementine but all of the characters are depicted with a certain raw and visceral honesty and vulnerability that is refreshing.