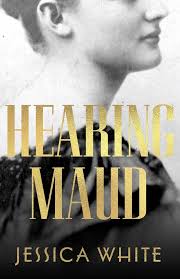 Author and academic Jessica White has two published novels but her latest book Hearing Maud (UWA Publishing 2019) is a departure from her previous work, and I believe this will be the book that will elevate her notoriety as a writer to another level. Hearing Maud is a hybrid of intimately personal memoir, meticulously researched history and searing self-analysis that is deeply affecting and will influence the way readers consider deafness. The 15-year period of research and study that Jess has devoted to this work really shows – it is a well-crafted, honest and thoughtful exploration of disability, a fascinating insight into the historical treatment of deaf people, and a courageous and inspiring tale of Jess’ journey as she continues to navigate a hearing world, the obstacles she has overcome, and the incredible amount of philosophical thought she has devoted over the years to her own experience and to the experiences of other deaf people.

When I first met Jess a few years ago, it took me several months – and many casual meetings – before I even realised that she was deaf. Reading this book has made me understand how much I didn’t know about what I didn’t know; it has provided me with valuable insights into the two strands of communication open to deaf people (oralism or lip-reading, as opposed to sign language) and the historical context to both, and it demonstrates one woman’s persistence, courage and determination to realise self-fulfilment despite her disability, and the enormous struggles she has overcome along the way. This is really an amazing book.

Jess lost almost all of her hearing after a bout of meningitis when she was four years old. Living in a rural farming community in the 1980’s, and with a lack of appropriate services, Jess and her parents attempted to negotiate her being a deaf person in a hearing world. Her childhood isolation and loneliness – the constant struggle to be involved in the world around her, the extreme exhaustion of trying to listen or lip-read and extrapolate meaning from physical cues – all of this is related in a raw and honest appraisal. Her escape into reading and the world of books and words, and later into writing, helped to tackle her frustration, but it was when she was a young adult and began to travel overseas to engage in further study that she really began to find her place.

Researching the nineteenth-century Queensland novelist Rosa Praed, Jess uncovered the story of Rosa’s daughter Maud Praed, who became deaf at only a few months of age, but was taught to speak rather than sign in an attempt to ‘normalise’ her. Maud’s story is tragic – despite being an intelligent, interesting and inquisitive child and then young woman, she ends up being committed to an asylum at age 28, where she spent almost 40 years of her life, and eventually died there aged 67, alone and without access to that most basic of human needs: communication. The lack of the appropriate sensory support for Maud’s deafness caused her discomfort and isolation which eventually became paranoia and delusions. In a different time, her life might have had a very different outcome.

Jess found a kindred spirit in Maud and began extensive research into letters and journals from her and also about her (from her mother and others). In the process of hearing Maud’s voice, from a century ago, Jess discovered more about her own deaf self, her identity, and found her own voice.

I’ve always considered Jess to be an achiever: literary criticism, novel writing, academic teaching; she has always struck me as very capable and enviably ambitious, discerning and goal-orientated. But this book has opened my eyes to the relentless struggle and constant attentiveness required for her to achieve this seamless image of a duck floating peacefully on the water…there is a lot of furious paddling going on underneath. The constant vigilance, and the lack of appropriate simple but necessary support services (such as Loop systems at public events), must make every day like running a marathon.

Throughout the book, Jess explores the idea of pharmakon, an ancient Greek term that means both poison and cure; there are many examples of circumstances in both her life, and in Maud Praed’s life, where something negative could also have a positive outcome, but ‘that the way the pendulum swung in favour of one or the other depended on the time and culture in which the deaf person lived.’ As Jess opens up about her own difficulties, including periods of emotional depression, she counters this with the circumstances of Maud’s life – so different, and yet in many ways, so similar. The support of Jess’ family, and particularly her beloved brother Oliver (and the absence of her lost brother Hamish), contrasts starkly with the lack of emotional support offered to Maud Praed (and the rather sinister beliefs of the time about deaf people and the risks of congenital deafness).

I learnt so much from this book, most particularly about the historical attitudes towards deafness (not good) and the importance of sign language, which is, after all, really just like learning another language. A lovely thing for many people to do just because it is another language and allows you to communicate with deaf people, but absolutely imperative for deaf people themselves, because it encourages a far greater range of expression and nuance than lip-reading, and is not as tiring. This book made me realise just how exhausting it must be for a hearing-impaired or deaf person (without the benefit of signing) to constantly keep up with the language going on around them, and has given me a renewed respect for those who do learn a second language – signing – and use it to manage their communication in a way that most of us take for granted.