The Sea and Us – Catherine de Saint Phalle 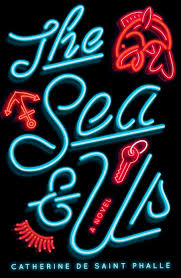 Stella shortlisted author Catherine De Saint Phalle’s latest novel The Sea and Us (Transit Lounge 2019) is a slim, beautifully produced hardback, written in spare and literary prose that mesmerises with its simplicity and directness, and the evocative ambivalence of memories and emotion. It is a story about place and belonging, desire and friendship, yearning for people or places we have left behind, and the strange and unexpected warmth of finding love in new and surprising ways.

While the book centres on Harold, a young man who has moved back to Australia after living in Seoul for 18 years, the narrative brings together a motley crew of disparate characters who outwardly appear very dissimilar, but who bond in unforeseen ways. There is Verity, a woman with a tragic past, who rents Harold a room above the fish and chip shop that she owns. Ben, a local, who befriends Harold with a casual intimacy. And there are the people Harold has left behind in Korea, who nevertheless appear throughout the book: Do-yun, the master potter who taught him to craft beautiful objects; Marylou, a prostitute who offers Harold a lasting friendship; Ha-yoon, the lover he has left behind; and Sung-ki, an old drifter who may just hold the key to the whole story.